Darts for Beginners: Learn to play “Around the Clock Darts”

Around the clock darts is the favorite game of most of the people who visit pubs and clubs. Playing this game with your friends, even with strangers, is simply amazing.

If you are just starting or searching for how to play darts for beginners, then around the clock is for you. Beginner dart players can practice this around the world darts. In this post, I will tell you dart game rules and how to win darts with a simple technique.

How To Play “Around The Clock” For Beginners And How To Win Darts? 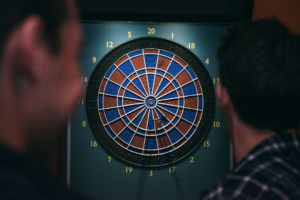 Around the clock dart is an interesting game. Moreover, it is one of the best social distancing games and activities for kids.

The dart game rules for around the world darts are pretty simple. The Player has to aim darts at every number and hit them one by one on board. He or she has to hit the board going in ascending order hitting 1-20 numbers on the board.

All players have to throw their dart and target the correct number in ascending order. You can hit the same number twice, but it will count for one time in standard around the clock dart game rules. For instance, you hit 12 for twice or more, but it will only score as one 12, not 24.

Every player gets fair three turns to throw darts on target. If you hit the desired targeted number, you have two darts left with you, but if you missed all the darts for your desired number, then it’s the next player’s turn. As players reach 20, then they have to hit the bulls-eye at last to win the game.

How To Keep Scores In Dart?

Scoring is the funniest and craziest part of Around the clock dart. You don’t need to implement BODMAS here. So how to calculate scores in this version of darting? How to win a dart?

Around the clock darts are not about calculating scores, but it is much about racing. The player who hit all the numbers and last bulls-eye first will be the winner of the game. This means the player who is ahead or maybe if he or she is first not doing very well can become the winner if they regularly hit on the target.

In this dart game, a player has to hit all the numbers, hitting every number going “around the clock.”

Some players also decided the winner to count numbers of all hits to reach to finish the game. The player who hit all the numbers and then bulls-eye in less number of throwing darts is declared as the winner. So playing around the clock dart is more a fun dart game than in which one calculates the scores.

Around the clock darts is one of the most popular games as people love it. This game is not about scoring but about racing which is the most amazing part of this game. Now enjoy the game and do share your experience with us by dropping a comment.

Active Gym Games That Will Cheer Up The Kids

Best VR Racing Games To Have A Adrenaline Rush