how to play 8-ball Pool Game Rules And Strategy Explained

The 8-ball pool is the easiest of all the cue games. There are many people who only know the 8-ball pool cue game. 8-Ball is the most played cue game in the world. There leagues for the 8-Ball pool game that hosts millions of players from around the world.

There are many pool table rules for an 8-ball game that people are not familiar with and should learn to change the way they play this game. To learn to play 8-ball pool, you must know the basic rules for playing pool as well. The game is colorful, and rules are pretty simple. But if you want to break, then learn some pool break rules for a great win. If you want to learn how to play 8-Ball, then keep reading this article. 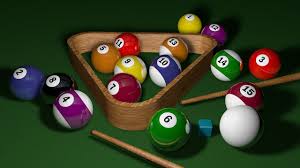 The 8-ball pool game begins when one of the players or team member( if playing doubles) will break the pool rack by striking the cue ball inside the racked object balls. The object balls are placed in a rack made of a wooden frame in a triangle shape. The frame helps in tightly grouping the balls together, which then helps in making a clean “break.”

alls in the corner and 8-balls. The 8-balls should be placed in the center of the third row from the front, one striped object ball in each corner, and the back corners have one solid ball. The remaining balls are placed randomly.

The rack is placed with an apex ball or leads in the rack formation on the foot stop. The Cue ball is placed opposite of the rack at the head spot. Now you can start the game.

Determining who will go first and who will break depends on the terms agreed upon. Officially in tournaments, the player with the lowest ranking breaks first. When playing with friends in a bar, you can just flip a coin to decide. To begin the break, the player places the cue ball at any desired spot within the kitchen. Mostly it is placed at the head spot. With the help of cue, the stick player strikes the cue ball and scatter all the object balls. If the players pot the 8-ball on the break, then the breaking players will decide if they want to spot the 8-ball back on the table or want to take a re-break. In case the cue ball is scratched on the beak, the remaining players get the chance to spot the 8-ball or re-break. When at least four balls hit the rails, it is considered as a successful break or when the object ball is pocketed on the break.

Once each player or team has been assigned with the target object ball, they will continue in turn. If you are playing doubles or in a team of two, then the players rotate every time it’s their team turn to play. Players continue to shoot the object balls as long as they fail to picket an object ball. If the player pockets an object ball they are assigned, then their turn will continue until they fail to pocket the ball or by mistake pocket the opponent’s object ball or in case they commit a foul. The first team or player who pockets all the seven object balls designated to them and lastly the 8-ball wins the game.

In many official settings, players are asked to call their short before initiating it so that it can be counted. This is done in order to establish which ball is the player going to strike and in which pocket they want it to land. If the players fail to call, then the ball will not be counted or cancel their turn. You can choose to ignore this rule if playing with friends.

Some Common fouls Of Pool Game

When you play an 8-ball game, there are possibilities of multiple fouls that cause penalties, cancel your turn, or may result in loss of game. Some of the common fouls of the game are: 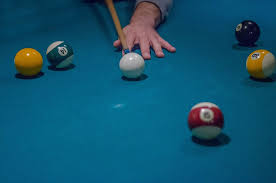 If you end up committing any of the fouls, you may end up forfeiting your turn, and you will get no points. There is only one official way to win at the 8-ball pool game, but there are many ways to lose the game.

Some of These ways are:

If any of these mentioned scenes happen, this will make the player lose the game, and the opponent team will automatically be claimed as a winner.